Last year I saw a video by Suzanne McNeill, CZT, where she Zentangled on a foam pumpkin.  She made it look so effortless and fun!  Well, I went out and bought foam pumpkins, but then I never did Zentangle on them.  Last night I decided it was time, so I got one out.  Suzanne used Sharpie paint pens, which contain an oil based paint.  Here are some pictures of my efforts.  It's really not as easy as it looked when Suzanne did it!

You can definitely see that the lines are far from perfect, but I didn't care - it was a lot of fun to do!  Drawing on a curved surface was a lot harder than drawing on a flat one!  Every once in a while, my pen would just go off on it's own and the lines would not be what I had planned.


Although the paint pen that I used is the smaller one that is available, it is still has a bullet point tip, which is much thicker than the Micron 01 that I'm used to.  With that being the case, some patterns are better than others to use.


I ended up coloring in some lines where my pen just veered off!


Wherever the oil based paint dried, it acted like a "speed bump" to my pen.  The pen would hit it and come to a screeching halt and then jump over the painted place.


I even did the bottom, because you KNOW people are going to pick it up to look at it!

In spite of it being more difficult to do, there was such joy in doing this, and I actually love how it turned out.  You should definitely try it!  I chose a white pumpkin and a black pen to do first, but I also have a black pumpkin and white pen, and I'm going to do that next.
Posted by Dianne Johnson at 11:31 PM 1 comment:

We have a new Magenta Challenge! 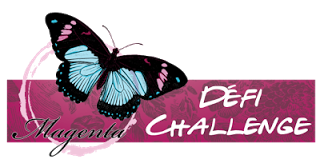 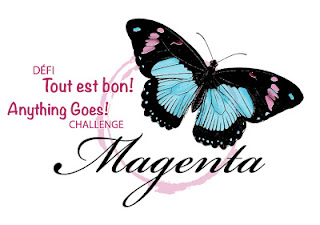 Use any color scheme you wish!  You just need to use some Magenta products for your creation. 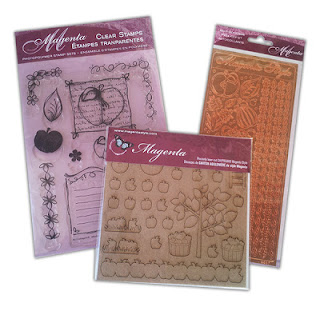 You can win this fantastic Magenta prize!

To enter, go here and use linkz to enter your creation


Here's what I created

First, I stamped the Samara Branch onto Kraft cardstock with Versamark, and embossed with Gold Detail embossing powder.

I love the Distress Stains from Ranger, which have a dauber top.  If you have a new bottle of Distress Stain, be sure to press in the dauber top once to open the valve.  Then you can turn the bottle upside down and press the top onto your paper while you squeeze the bottle lightly to apply as much stain as you like.

I tested the colors I have onto a scrap piece of Kraft cardstock.  I'm glad I took this extra step, because some of the colors really soak into the Kraft, and some appear brighter.  They look completely different than they do on white cardstock.  And I..uh..might have contaminated some of my dauber tops with metallic Distress Stains on a previous project.  That's ok though, because these can be cleaned off.  Here's my test swatch:


I chose the fall colors I liked the best and went from there.  Oh, and if you do a test swatch like this, wear an apron and cover your table.  Some of the colors are juicier than others.  Just sayin'.

I ended up making a larger card than I normally do.  I was just experimenting with the Samara stamp and the stains, and I liked it so much I didn't want to cut it down.  I stamped the sentiment onto a piece of Vellum and mounted it in the middle with vellum adhesive.  I added a sprinkling of pearls from the top left to the bottom right.

This card was so much fun to do!
Posted by Dianne Johnson at 7:33 AM 1 comment: