Hi I'm over at the Magenta blog today, and you can see that post here.  I very much felt like making a happy card today. I've been feeling a bit down lately, and bright happy colors cheer me up. 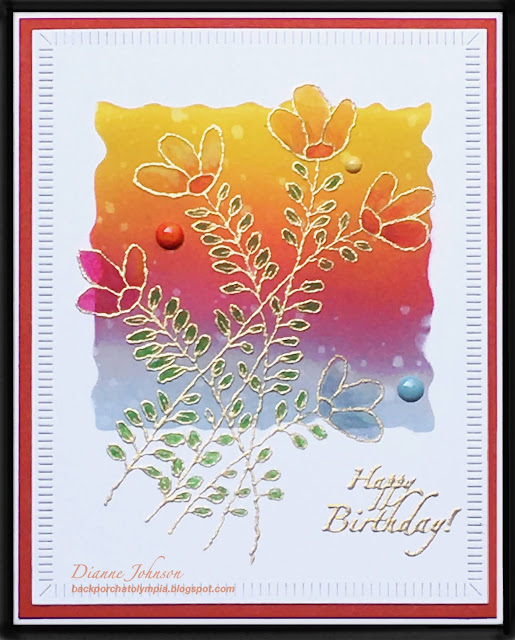 I made the background of this card by blending Distress Inks through the wonderful Square Silhouette stencil designed by Nathalie. I love the uneven edges of the stencil design. 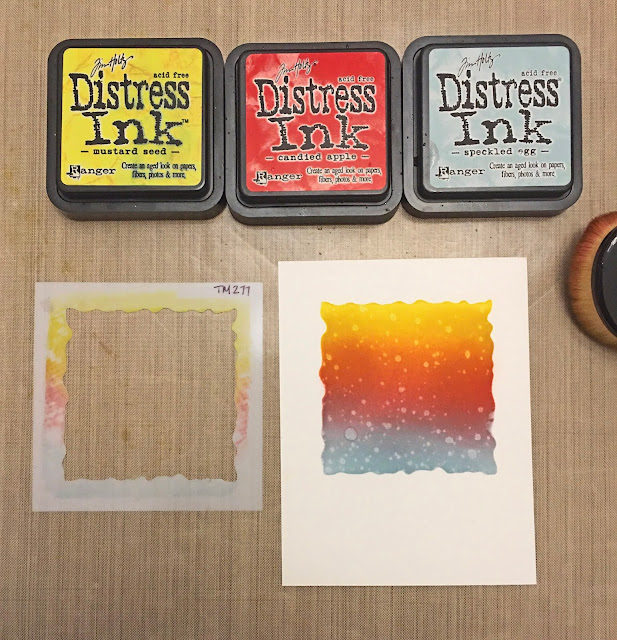 After blending the colors, I flicked a little water all over the square to get this speckled look.

I then stamped the whimsical Graceful Tri-Petals stamp in Versamark over the panel, and embossed in gold. I decided to add more color to the petals with color pencils, and it was so easy and fast to do. 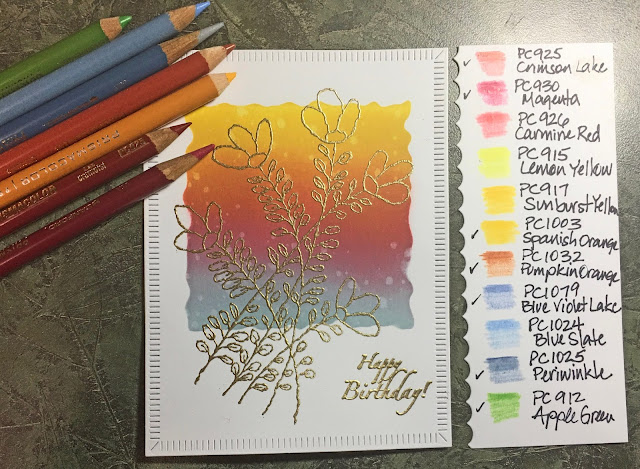 I chose out some pencils and made a quick swatch of them to find colors that would go well with the blends.

At the end, I stamped the Happy Birthday sentiment in Versamark ink and embossed with gold embossing powder. I cut the panel out with my current favorite edger, the Crimped Frame Die from The Greetery, and added 3 enamel dots. 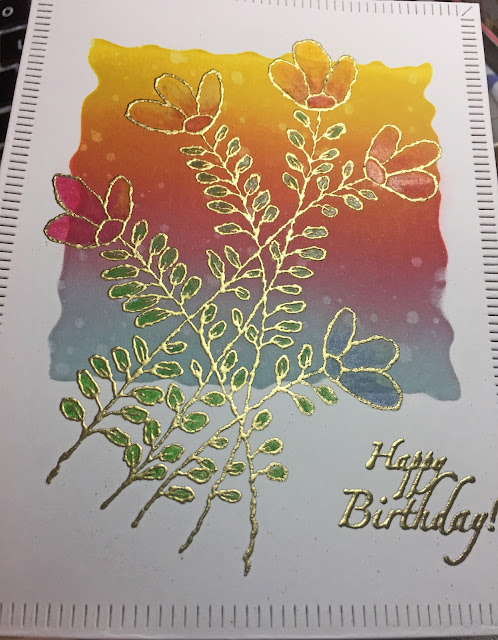 I love how the gold embossing made it look.

I hope you enjoy! Stay safe out there everyone! 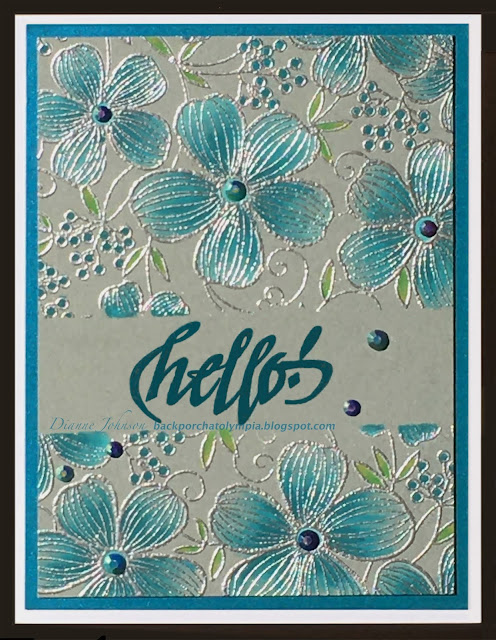 The only rule was to use Magenta stamps or products. My Canadian exchange partner is Christine Alexander, who is another Magenta Design Team member. She is amazing! Be sure to check out her blog here. 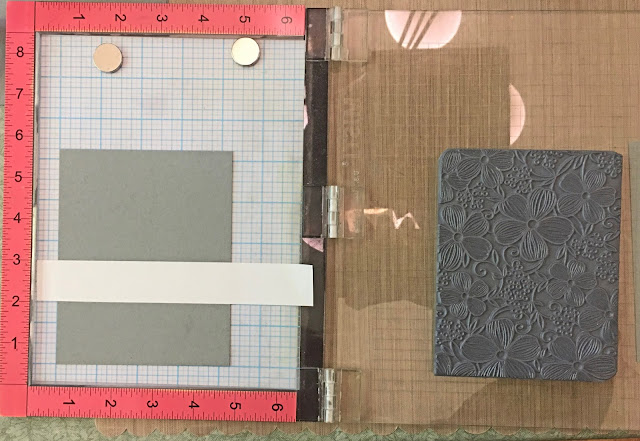 I started out by masking a 1" strip across the bottom 1/3 of the card for a sentiment. Then I stamped the beautiful Magenta Floral Background in Hero Arts Unicorn White ink. 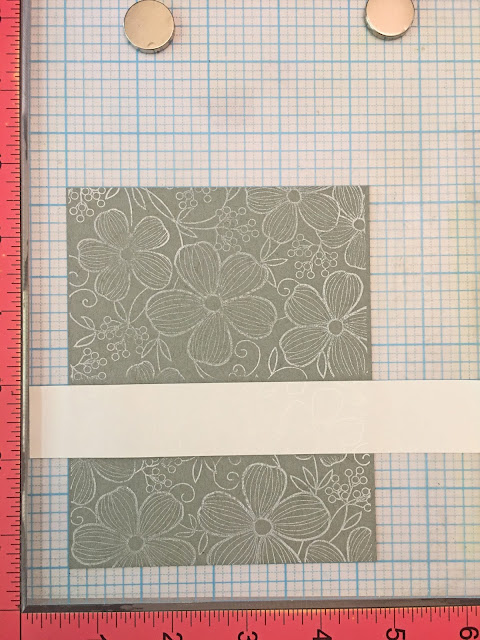 I colored the petals and leaves with Prismacolor pencils, and then put the panel back into the stamp platform and stamped with Versamark ink. I embossed it with silver embossing powder. 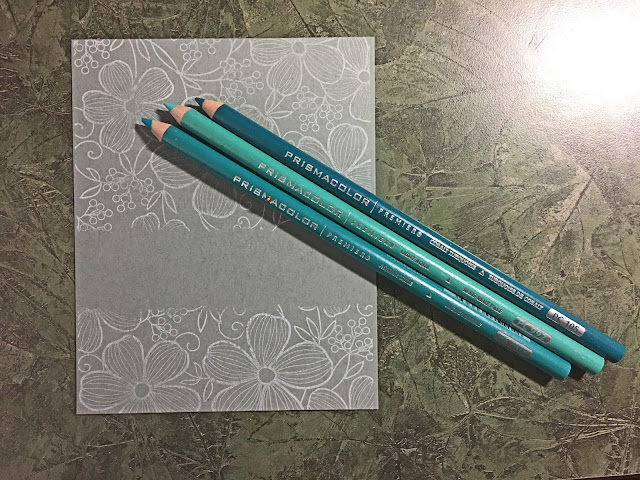 At the end I stamped the Magenta hello stamp that was designed by Sally Penley, into the space left by the masking. I added a few gems.

The card I received from Christine was amazing! It was like a little book where she had stamped several panels. You can see the card she sent me on her blog here.

Posted by Dianne Johnson at 1:13 AM 6 comments:

My friend Mariëtte van Leeuwen, another Magenta DT member, had the great idea to start up a card exchange for those who love Magenta stamps. After calling for interested participants on FaceBook, she matched up partners to exchange cards. I was matched to one person in The Netherlands and one in Canada. I was afraid that my cards would take a really long time to get to The Netherlands especially. Lately it has taken my mail 6 weeks to two months to arrive in Iceland, and I thought it would be similar, but my card arrived to my partner Lizenka Schuijl Commandeur, in The Netherlands in only a week and a half. 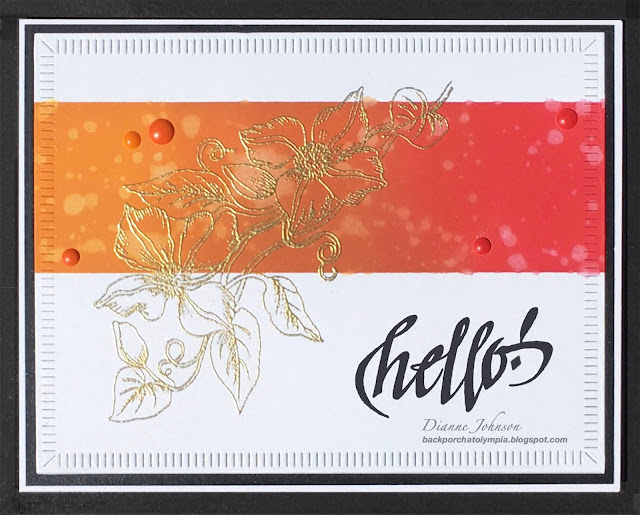 This card was done by masking off a strip and blending Distress Ink, one of my favorite techniques. I then stamped the beautiful Clematis Vine stamp and embossed in gold. The hello stamp is from the Magenta Sally Penley collection. You can see other examples and more information using this technique here and here.

I had already received Lizenka's beautiful card days ago

The Greetery Pinwheels and Distress Ink

Someone closest to me in this world is a friend I met in high school; and people, that was a very long time ago. I have known this person for nearly 56 years. We had just moved back to the states from Japan, and I was starting high school at a new school, in a new town, where I didn't know anyone. I met her in the girls bathroom, where we were both hiding during lunch. Who knew we would be friends for life? She is almost exactly a month older than I am, and I have spent a lifetime teasing her during that month about being old. Then it's my turn. 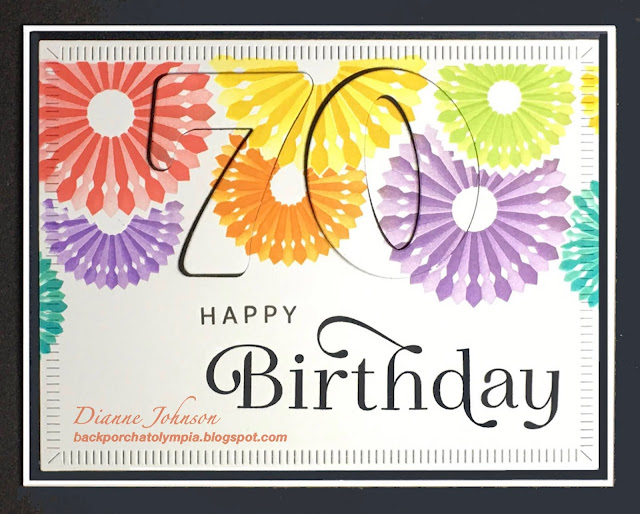 This birthday is a big one for both of us; and it had to be the Pandemic year that we turn 70!
Here is another card I made for her a few years ago.

Can I just say that I love the products from The Greetery? Betsy Veldman's sense of design is amazing, and she really thinks of every little detail. The layering stencils that are part of this set are incredible...easy to use, festive and beautiful. I used Jennifer McGuire's technique of constructing a quick jig to make multiple panels. You can see her post here. 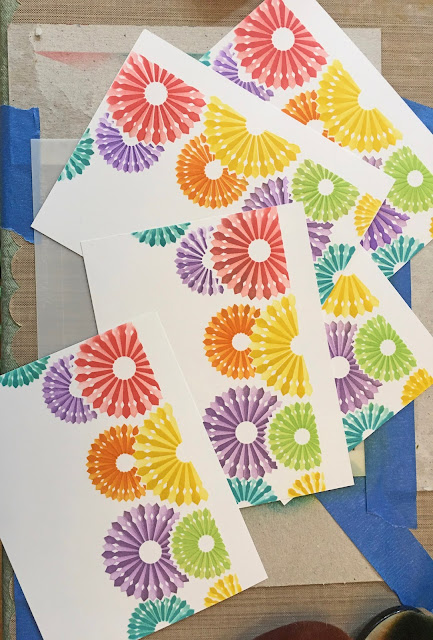 I used Distress Inks in rainbow colors. You can use more than one color on each pinwheel, but I chose to use tone on tone, so each pinwheel is done in one color, but the second inking was a lighter application (I actually just used what was left on my brush from the first inking.

Once I had inked a number of panels (so I have more for future use) I took one and cut it with the Greetery's Crimped Edge die. I can't stop using this die for the beautiful edge it gives to my panels. 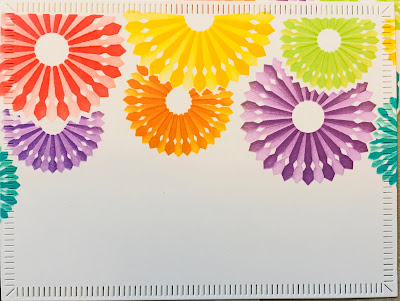 Next, I got out an old die set that I have from PTI, which die cuts large numbers. I die cut the 70 from the panel and also from black craft foam, and popped it up in place. The sentiment is from another Greetery set called Birthday Blooms. 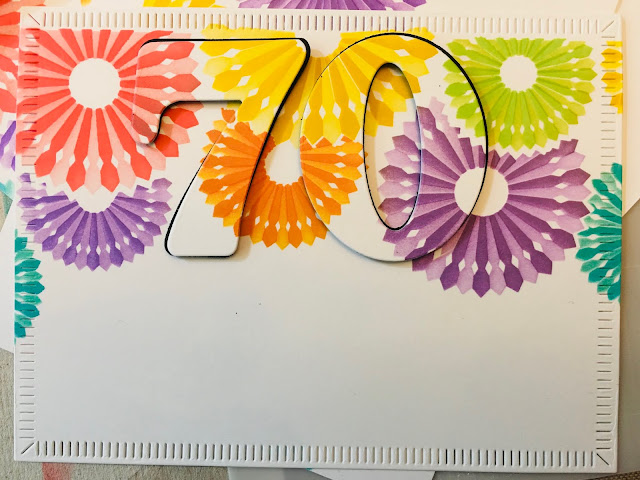 I sent her card a week ahead, so I hope it gets there in time. Either way, I'm sure we will be chatting on the phone or FaceTime on or near her birthday, as we do every year.

Posted by Dianne Johnson at 6:00 AM 4 comments: