Happy Valentines Day everyone! I don't make a lot of Valentines, but I made two this year for a couple of friends that I thought would enjoy them. They are almost exactly alike. 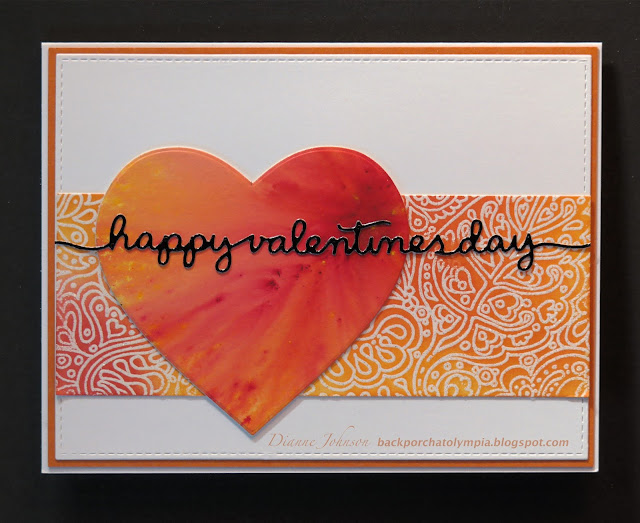 The heart in this one was made from a panel of watercolor cardstock on which I had added Nuance powder in a variety of colors and sprayed. I particularly liked the spray pattern on this. Here's a close-up 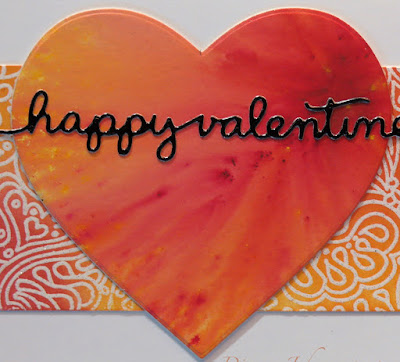 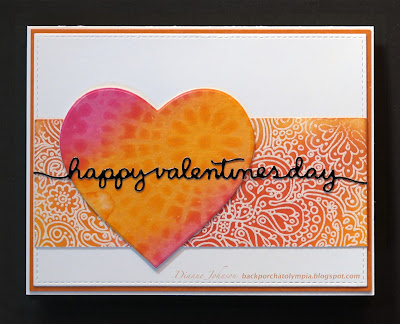 Here's a close up. I have posts about how to do stencil stamping here (scroll down), here and here amoung others. 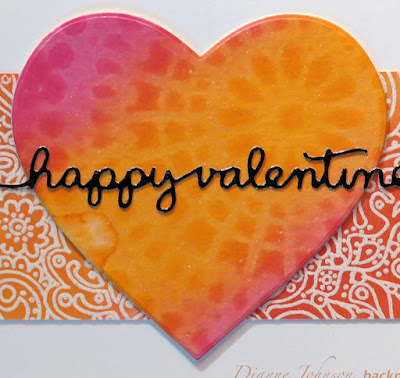 Unfortunately the stencil I used on this heart is a Magenta one that was discontinued, but you can get the same look with any stencil that has about the same amount of negative and positive space. I used Picked Raspberry, Spiced Marmalade and Wild Honey Distress inks for this heart.

I cut these hearts out with the Hero Arts DI334 Nesting Hearts Infinity die set. I love this set! It has 10 heart dies, the largest being 4.66" x 4.11", and the smallest being .27" x .23". The hearts are a nice shape and the dies are open, so that you can place them on a colored panel to cut it in just the right place to capture the look you want.

The rectangular background panel is something that I already had in my stash. It illustrates ink blending over emboss resist. You can see this technique demonstrated in a previous post here. I made lots of panels where I stamped with Versamark ink, using a large background stamp, and embossed it with JudiKins Iridescent Sparkle embossing powder. You can't see it in these pictures, but what looks like white in the background is actually very very sparkly, almost like lines of glitter. It's beautiful in real life. You can also use other embossing powder for this technique, such as opaque white or White Diamond.

The background panel that I had was 4" x 5.25" and I cut it in half and use half for each of these cards. The stamp I used on this panel was Impression Obsession CC024 Tapestry Cover a Card.

The Happy Valentine's Day sentiment was die cut with a Mama Elephant die out of glossy black cardstock on which I had applied Stick-It adhesive to the back.

The background strip, heart and sentiment were adhered to a panel of Neenah Solar White 80# cardstock that was die cut with the stitched rectangle die from Die-Namics MFT 643 Blueprints 13. This die cuts a rectangle that is exactly 4" x 5.25" and has a stitched edge. I matted the panel with a slightly larger piece of Stardream Flame cardstock, and the whole thing was mounted to a base card of Neenah Solar White 110# cardstock.

I hope you enjoyed these. I did a Zentangle square recently that I think I will make into a Valentine for my hubby. He didn't photograph this, so it's not a great picture, but here it is. I will probably add some color to it before it's turned into a card. 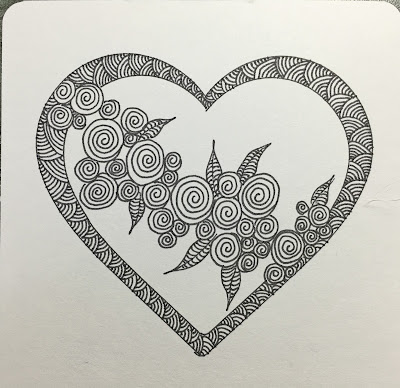 Posted by Dianne Johnson at 1:00 AM

Dianne Johnson
I live in the beautiful Pacific Northwest part of the U.S., in Olympia, Washington with my husband of 40 years. We have three wonderful grown children, and five amazing grandchildren. I did some stamping in the 80’s, but drifted away to do jewelry-making and knitting. I came back to stamping and card making when I discovered Art ‘n Soul; a fabulous fine art stamp store in Olympia. I worked at Art'n Soul for nearly 7 years before they closed in late 2017. I learned so much and really enjoyed my time there. I love to use many different techniques and mediums in my papercrafting, including paints, inks, glazes, markers, stencils, watercolor, etc. I also love to Zentangle, and you never know when tangles will find their way into my work.