I'm participating in another fun card exchange at Magenta. This time, it's done like a chain, so the person I send to isn't the same as who will send to me. I got Carole Dion to send to, and no pressure! She is one of the best in the Magenta DT, and also a friend. 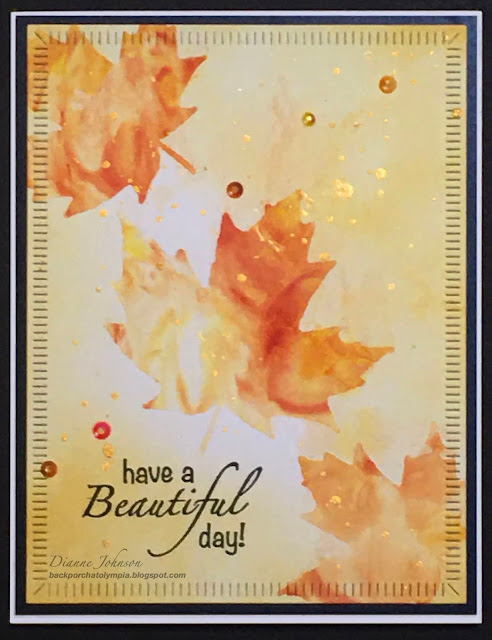 Another friend of mine, Pam Nelson, has been experimenting with making videos of interesting art and craft techniques. One of them is a technique using shaving cream to make really interesting and beautiful backgrounds. You can see that video here. (Please remember to click "thumbs up" if you like it, and thanks so much
Pam recently thought of a new twist on the shaving cream technique, using stencils. She has done a post on that twist, and you can see her post here. I tried using her technique on this card, and while I didn't do as well at it as she did, I had fun! 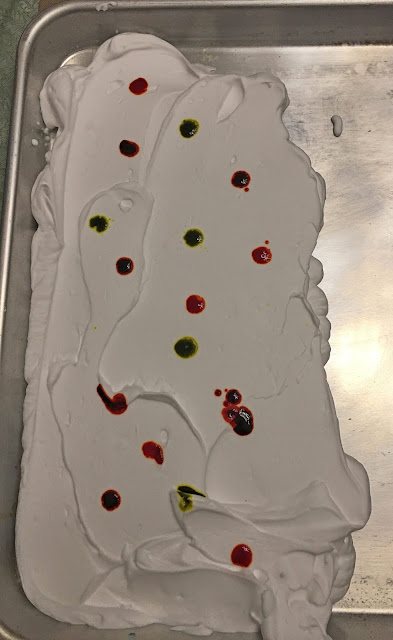 To start with, I put some shaving cream on a cookie sheet and added drops of Distress re-inker. I used the new Crackling Campfire, Spiced Marmalade, Wild Honey, and Mustard Seed. I knew that I wanted to use the Maple Leaf Trio stencil from Magenta, so I was going with Fall colors. 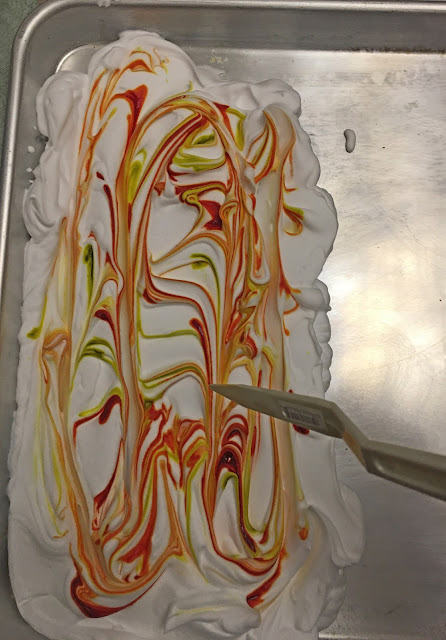 I used a palette knife to move the colors around a bit. Does this look some kind of crazy dessert to anyone else? 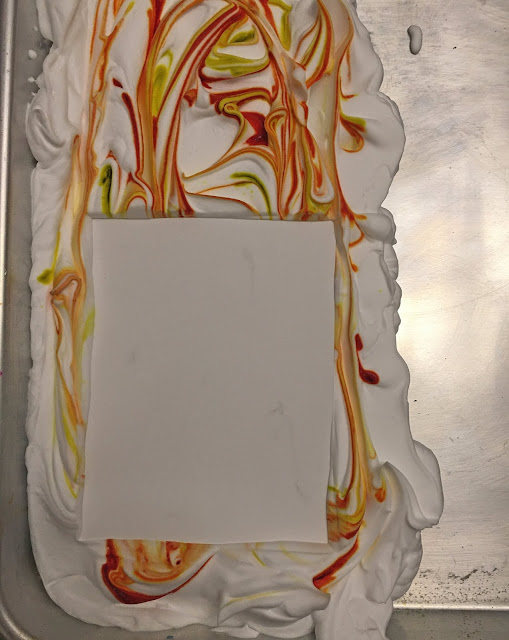 I wanted to just make some backgrounds to start with, since I hadn't done this before. I placed a piece of cardstock on top and pressed it in well. I was using 110# Neenah Solar White. 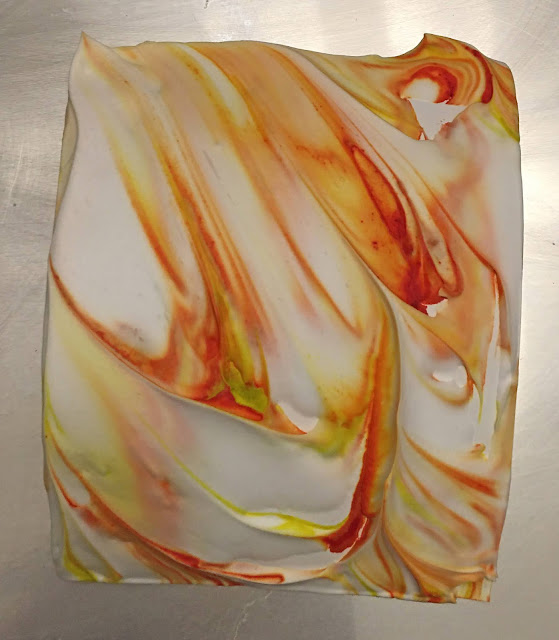 This is what the panel looked like when I picked it up off of the shaving cream! 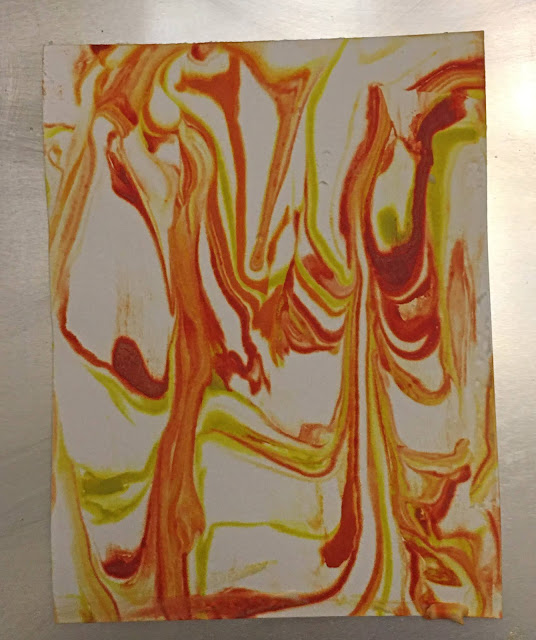 After scraping off the shaving cream with a scraper, I was left with this really interesting background. I continued making background after background and became fascinated with this process. I didn't want to waste any of the shaving cream, and even the cream that I scraped off, I put back onto the pan and continued to use it. That resulted in panels that were a big more muted and blended, but also wonderful 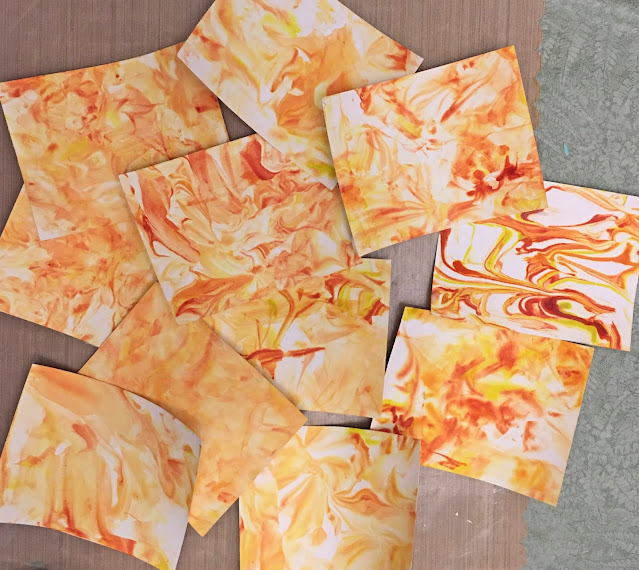 I wanted to use a stencil in this technique as well, and I chose this one from Magenta 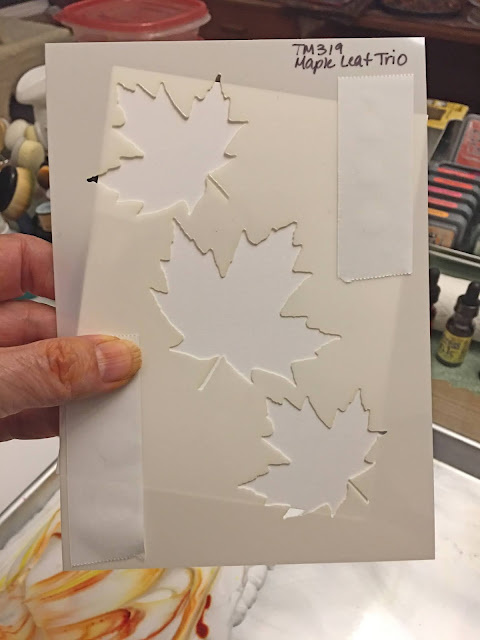 I had trouble getting a clear image of the maple leaves in the several times I tried. I thought maybe that it was that the leaves were too large to work, but later learned that this was just operator error! Be sure to check out Pam's post to see how she did this.
I ended up using the shaving cream like stencil paste. I put the stencil on my panel and put lots of the shaving cream on it, scraped it off the stencil, and leaf shaped piles of shaving cream were left when I pulled the stencil off. (I somehow did not end up with a picture of that, sorry) 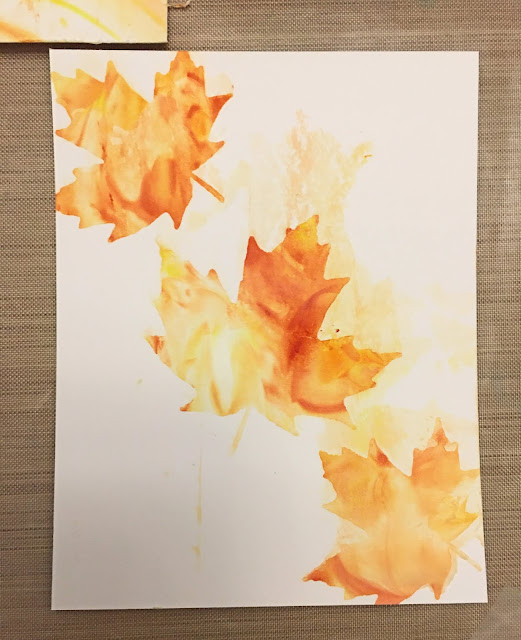 I let the shaving cream sit on the panel for a bit, and then once I scraped it off, I was left with this. I blended some Wild Honey Distress ink onto the panel, and splattered it with gold Liquid Peerless watercolor. I was pretty happy with how it turned out in the end.
I stamped the sentiment, and die cut the panel with The Greetery Crimped Frame die. The panel was matted with So Silk Black Style cardstock and mounted to a base card. I added a few gems at the end.
This was a lot of fun, and bonus, the cards smell really good! I hope you'll give it a try.
Magenta Products used: